Merritt was born in Houston and grew up in Raleigh.[2] She credits her father's eclectic taste in music as a major influence.[3] At the age of 20, Merrit enrolled at the University of North Carolina at Chapel Hill to study creative writing.[4]

Merritt joined a band called the Carbines and played small clubs in cities of Chapel Hill and Raleigh.[5] In 1998, the band released a 7-inch single, "Jukejoint Girl," and in 1999 the album The Two Dollar Pistols with Tift Merritt on Yep Roc Records.[6]

In 2000, Merrit won the MerleFest's Chris Austin Songwriting Contest[7] and in 2002 released her debut album, Bramble Rose. The record landed on the top ten lists for both Time and The New Yorker, and was called the best debut of the year by the Associated Press.[8] While touring to promote Bramble Rose, Merritt opened for fellow North Carolinian Ryan Adams, who had helped her secure her first management and record contracts.[9]

Her follow-up release, 2004's Tambourine, was produced by George Drakoulias and featured backing by Benmont Tench, Mike Campbell, Neal Casal and Don Heffington.[citation needed] The album was nominated for a best country album Grammy Award in 2004.[10] She was nominated for Americana Music Association: Album of the Year, Artist of the Year, and Song of the Year in 2005[11] Merritt's performance on Austin City Limits was released as a DVD on New West Records.[12] A sold-out concert at the North Carolina Museum of Art in Raleigh, North Carolina, was released under the title Home Is Loud that same year.[13]

Released on Fantasy Records in 2008, Another Country featured guitarist Charlie Sexton. Merritt wrote the album in a Paris apartment.[14][15] Paste magazine gave the album a four-star review.[16] The song "Broken" was nominated for an Americana Music Award for Song of the Year.[17][18][19] While touring England, Merritt recorded the album Buckingham Solo, which was released on Fantasy Records in April 2009.[citation needed] 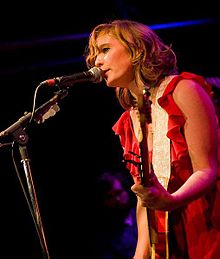 Merritt on stage in Seattle during 2010

Her EP, Please Break the Silence of the Middle of the Night, was released later in 2008.[citation needed]

Merritt has been the opening act for Joan Baez,[20] Kris Kristofferson,[21] and sang "The Star-Spangled Banner" for then-Senator Barack Obama at his last campaign rally.[22]

See You on the Moon

Merrit's sound has been described as "sonic short stories and poignant performances."[25] She has been compared to artists like Joni Mitchell[26] and Emmylou Harris.[27]

A review in The New Yorker praised her[27] and The Wall Street Journal included her in a weekend feature on singer-songwriters, describing her as "in the tradition of Joni Mitchell, James Taylor and Leonard Cohen".[26]